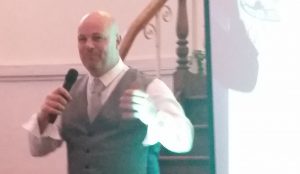 Glenn Catley former WBC Boxing Champion was invited by MBNL a joint venture company owned by EE and Three to come and give a motivational speech to its engineering staff. At first like many of my colleagues I was skeptical as to what the connection between engineering works we do at MBNL and boxing and how a boxer’s life experience can help us be motivated. However as soon as Glenn started to speak I knew immediately why as he had a sparkle in he’s eyes and an amazing personality that was so down to earth. Glenn was a humble man who did not think much of he’s achievements but wanted to share how anyone with the right attitude, dedication and commitment could achieve their desired goal if they truly believed in it.

Glenn turned pro in 1993 as a Middleweight and Won 21 of his first 22 fights, and won the WBC International Middleweight title against George Bocco. However, he then surprisingly lost this title to Hungarian Andras Galfi by TKO. This was one of he’s lowest point and he wanted to tell us how he turned he’s life around and returned to glory.

Glenn said “In order achieve anything you’ve got to have a dream and above all you must have a goal”. At the time when he lost to Galfi he said he never really had a dream or a goal and was just boxing. According to Glenn he’s life changed when he was asked by Steve Collins (former WBO middleweight and super-middleweight Champion) to become he’ sparring partner. Glenn went to Jersey to meet Steve in order to spar with him and provide training. During this time with Steve he first came across hypnotherapy and he told us how on the day’s when Steve went to therapy he would come back to the gym and not look at anyone or speak to anyone but go straight to the ring. On those days the fights with Steve were tough and he was so focused and dedicated that nothing distracted him.

Glenn started taking hypnotherapy and focusing on he’s life, dream and goal. He learnt a lot from he’s sparring with Steve Collins and the therapy sessions along with the continuous training and dedication started to change he’s life and boxing.

Catley came back from he’s unexpected setback with Galfi and won the British Middleweight title with a KO over world rated Neville Brown.

He then moved up to Super Middleweight and challenged WBC World Super Middleweight title holder Richie Woodhall in 1998, but lost to a majority decision. However most people watching the fight did not think Woodhall performed well and many observers felt Catley had done enough to win. According to Glenn this was just a minor setback as he knew he had won and that’s all that mattered.

Catley then had an impressive run of wins, capturing the WBO Intercontinental Super Middle title in a revenge victory over Andras Galfi, taking the IBF version against Andy Flute. Catley then travelled to Canada and scored a very impressive KO win over the highly rated Eric Lucas who had never previously been knocked out.

Glenn was saying that each time he had a fight the pundits and press would write him off and he would go into the ring with a dream and goal in mind to prove them wrong. He talked about how our bodies and muscles can react to things without thinking about it. For example if you were opening a cupboard and something fell out you would instinctively try to catch it. In that moment you do not have time to think. You learn to react and your mind remembers how to react in those circumstances.  Glenn learned how to react in difficult circumstances in boxing without thinking about it. These techniques helped him in he’s fight with Woodall where for 3 rounds he did not have full senses and visibility after a punch to the back of he’s head. Yet he managed to continue the fight through instinctive reactions and he’s opponent was none the wiser.

In Frankfurt Catley again scored an impressive KO “on the road”, winning the World title via 12th round TKO.

Glenn said he was not a great boxer yet he achieved these wins because of he’s dreams and the goals he set. Before any fight he would visualise the win and what it would feel like to win. He would dream about the win and the after party in which he would celebrate with he’s family. This made he’s mind focus on the boxing and how he could achieve he’s goals to deliver the outcome he desired.

Thinking about the way Glenn approached boxing and how he achieved he’s goals it is clear why there are so many similarities. In engineering we have many challenges and if you don’t have any goals or aspirations then achieving the right outcome becomes an impossible dream.