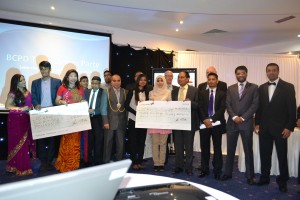 BCPD Trust hosted a Charity Dinner to launch the Luton Online Business Innovation Centre on 16th June 2014 at Crescent Hall, Luton. This was a glamorous occasion held at a prominent Luton Venue location with celebrities, local businessmen, politicians, professionals and young entrepreneurs all mingling to create the perfect atmosphere.

Each short listed contestant presented their business idea in front of the panel of businessman judges. The panel of judges scored each contestant at the end of their presentation and the top three highest scoring contestants were awarded prizes based on their ranking.

The event Presenter and Host was Nadia Ali from the BBC Asian Network. Nadia has also worked for a number of Asian Channels, including B4U, Channel S, ATN Bangla and has hosted the hit reality show Forgotten Roots.

There was light entertainment throughout the event. There were quiz questions aimed at promoting local business.

This event was promoted and publicised locally and nationally via social media, websites, newspapers, Radio, TV and leafleting to community and businesses.